Black Mirror Review: Episode S1E3 “The Entire History of You” 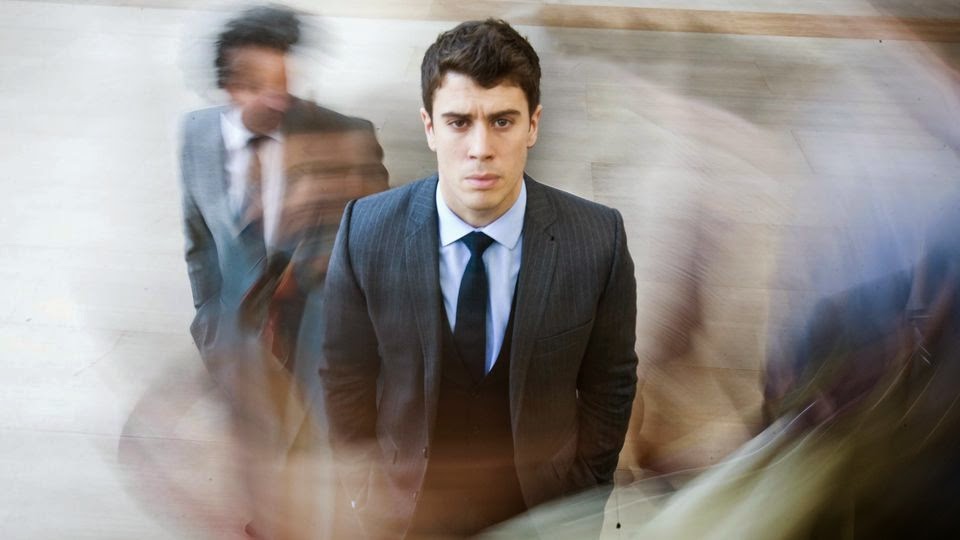 In the future we’re all unlikeable Wankers

Black Mirror S1E3 is boring and not worth watching. Here is how it could have been better.

Here is a basic soap opera/lifetime plot that is reassuring in its predictability.

1)      Husband suspects wife is cheating on him. He suspects this because he comes home early from a business trip, arrives late to a dinner party his wife is at, and his wife is surprised and embarrassed because she was talking to another man, who she clearly finds much more interesting than her husband.
a.       (This is, hilariously, similar to the start of the Will Ferrell movie Old School)


2)      Husband becomes further suspicious when wife laughs at other-man’s jokes that aren’t funny.
3)      Husband becomes annoyingly passive aggressive in his accusations of wife being interested in other-man.
4)      As suspected, wife and other-man did indeed used to make the sex together, before she met husband. Wife admits it.
5)      As further suspected, wife admits she’s actually slept with other-man recently, despite being married to annoying passive-aggressive husband.
6)      And, by the way, that daughter that wife and passive-aggressive husband have? Yeah…… it’s other-man’s kid.
7)      Passive Aggressive husband and wife break-up. Husband is sad.
8)      Fin.

You’ve likely seen this story before, and it’s not any more interesting this time either. It is in fact woefully boring.

What’s disappointing is that the above scenario actually is the exact synopsis of the 3rd episode of the much buzzed about, much talked about UK Sci-Fi Horror Series – Black Mirror.

The buzz, save for this episode, is well deserved. Like all good Sci-Fi, Black Mirror takes a future setting and uses it to comment on the Now. Black Mirror is the best (arguably only) Sci-Fi fiction to really take the world of the internet, social media, and the death of old-media, and break it open to see what it’s guts look like.

Now available on Netflix in the US, the Yanquee’s are finally able to catch up on the best Sci-Fi series since the Twilight Zone.

·         The first episode of Black Mirror is a somewhat puerile (but worth watching) meditation on out-of-touch journalism, the wisdom of crowds, narcissism, shame, and participatory art.
·         The second episode is a combination of facebook, Wii Mii’s, American Idol, reality TV, prison, maintaining authority, subjugating the masses, freemium gaming, and love, all rolled into one of the most depressingly tragic visions of the future ever created.
·         The third episode is a soap opera in which every character is unlikeable and nothing interesting happens.

“How exactly is the above plot supposed to be Sci-Fi Horror?” you ask?

It’s not. Black Mirror S1E3 “The Entire History of You” is not Sci-Fi, it’s not Horror, and it’s not interesting. It’s standard soap opera drama. Its derivative and you should not waste your time watching it.

But – it’s clear that the writers/producers of Episode-3 think (incorrectly) that it is Sci-Fi because of a Sci-Fi tech feature in the world of the episode called a ‘Grain’.

Basically, nearly everyone in the show has a ‘Grain’ installed in their heads, a little piece of tech that allows them to replay the audio and video of every moment in their life (or maybe just since the grain was installed, it’s not explicitly clear). They can play back for solo watching in their own eyeballs, or they can seamlessly project the Grain video onto a TV for others to view as well.

This has some interesting implications that are sadly only touched on briefly in the epsidoe; for example to get through Security at the airport, you let security peek through the last 6 weeks of life, so they can confirm you weren’t building bombs or mingling with terrorists. The Grain is also a great nanny-cam, as you can play back the baby’s audio/video to ensure the babysitter cared for the baby properly. (Dealing with parents monitoring teenager’s activities via this process, without the teens consent, would have been interesting)

Instead, in Black Mirror S1E3, the Grain tech is merely used to confirm (not advance) the development of the plot. Rather than having passive-aggressive husband obsesses on his lonesome over whether wife laughed too much at the joke that wasn’t funny, he literally plays it back on the TV for himself, and other people.
Rather than argue inconclusively (he-said/she-said) about whether wife had mentioned having a brief one-week fling with other-guy or a 6-month relationship, husband plays back the memory of their pillow talk after their first time, where wife lists her past relationships, and she really did downplay the other-guy incident to be only one-week. Yes. The husband is really that bad at pillow talk. “That was great. So now tell me about other times that were better!”
(Pro-Tip: guys – you should never ask about your girl’s past. If you ask, that just lets her know that you’re a weak insignificant tool who lacks confidence)

For additional terrible effect, the Grain is used to confirm that wife and other-guy did indeed sleep together recently….. and without a rubber (the Grain records all the close-up intimate details!) proving that daughter does not belong to passive-aggressive husband, but to other guy.

All of those plot events would have happened without the Grain. Wife was clearly unhappy with passive-aggressive husband, and their divorce was coming, Grain or no. And, for clarity, the episode makes it clear the cause of the initial rift in their relationship is not an over-reliance on tech, or living in the past via-Grain obsession, but just on the husband being a passive-aggressive unlikeable sad-sack loser.

And, because the paint-by-numbers plot could exist functionally without the inclusion of the Grain, the episode fails as Sci-Fi, and lacks any poignant social commentary bite. There is no commentary on the dangers of tech, or analysis of the dangers of replaying memories rather than experiencing them as they are happening. It’s just a story about unlikeable people in which the tech is incidental.

Here is how it could have been better.

Right off the bat, the story needs to be tragic. Right now, it’s not, but that can be flipped with one key change, what if Wife is not unfaithful and has not cheated on passive-aggressive husband.
Therefore: the daughter is biological to passive-aggressive husband.
Furthermore: Wife wasn’t flirting with other-guy, but in fact was asking him something more innocuous such as “how ‘bout them Yankees [or “how ‘bout them Arsenal” cause the show is in the UK]”? – her surprise comes merely from having passive-aggressive husband attend the dinner party he was supposed to miss.
To add additional sad-sack tragedy, she’s does know other-guy, but it’s from something non-threating, like he used to date a friend of hers, or they worked at the same job together years ago, or they had geometry class together in college, etc.  They didn’t used to boink.

So absolving the wife of any blame, infidelity, or wrong-doing, how could having the Grain memory-playback-device cause passive-aggressive husband to self-destruct and fall away from his own marriage and family?

It could be established that passive-aggressive husband has very limited interest in his wife; or his daughter for that matter. Instead he is far more addicted to watching replays of his early days with his wife, when they still had that ‘spark’ – first dates, proposal, wedding, first time, etc.  As he can watch Grain replays solo, in his own head, he could be doing so while, literally, sitting right next to his wife; perhaps even as she’s trying to engage him and he’s ignoring her. That’s a Black Mirror scenario that should be extremely familiar to most couples today.

How to establish husband obsessing over other-guy? Keep the awkwardness of wife being surprised by passive-aggressive husband, and keep the wife laughing at other-guy’s joke that wasn’t actually funny.
Have husband play these two events over and over again, then start accusing wife of interest (He’s hotter than me isn’t he?) before jumping to outright accusations of infidelity.
Husband can insist she replay the event (which is creepy and causes shame) – make it clear that husband is devolving into stalker-material.
Further, establish that in the world of this episode, it is against social norms to ask to see other people’s Grains, even significant others (this dialogue can effortlessly be established at the boring dinner party.)
Husband becomes enraged because Wife is reluctant to show her Grain (it’s an invasion of privacy) and further enraged when he finds that some time-frames in Wife’s Grain have been deleted (which was established as possibility in the episode). According to Wife she’s deleted things that aren’t worth remembering, like the 3 days where she had a god-awful stomach flu and it was coming out both ends.
And while that is, truthfully, why she deleted 3 days, husband will insist it was because she was with other-guy!

Make the marital problems spill out into other areas, make Husband play back scenes (the laughing at not-funny joke) to other people and ask them to critique wife’s actions. Have this occur with wife in the room and have it be uncomfortable for all involved. Have this happen days/weeks after wife thought the matter was settled. (This happens somewhat with the babysitter very briefly, but this should be grander and more public in scale)

This could further degrade into unsubstantiated accusations by passive-aggressive husband that the daughter isn’t his, due to any missing days in wife’s Grain. This would be really paranoid next-level insanity that shocks wife and her friends/associates when she informs them of husband’s increasingly unhinged behavior.

Wife could make one last chance to connect with husband IRL, not via Grain footage, and he could blow her off. She should grab daughter and leave in a bid to get his attention, but he doesn’t actually notice them leave, despite them being only a few feet away, because he’s too engrossed in a Grain playback.

Cut to the end of the episode as it currently exists. Husband wandering around a messy unkempt house (no longer a home), he gets to open a paternity test letter that confirms baby is his, but with a clear “Fuck you” message – and then he cuts the grain out of his neck. Tragedy.

Because now, the Grain actually was the problem (in addition to the husband just being an idiot).

Whereas in the current version of the episode, the wife’s infidelity is the core problem, the Grain doesn’t ‘cause’ the problem. The Grain is incidental.

And that’s actual Sci-Fi Horror/Tragedy. The tech causes the abandonment of human relationships, rather than takes a back seat as humans destroy themselves regardless.

Fin. Let’s call for a re-shoot.